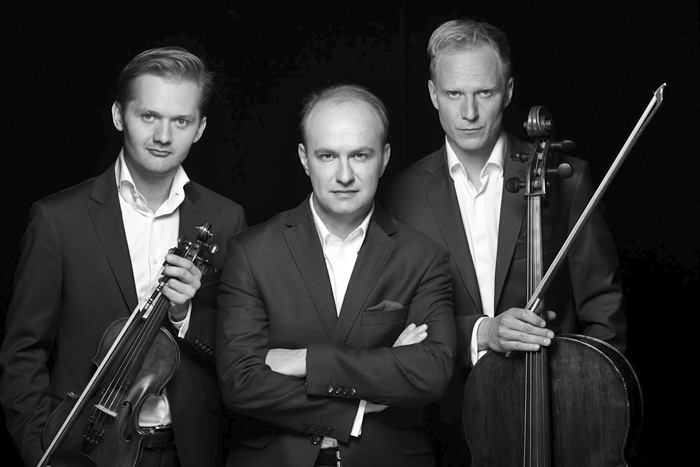 The formation of the Boarte Piano Trio just a few years ago alterted discerning musians and music-lovers to a new chamber ensemble that has been described as having all the potential to become the natural successors to the legendary Beaux Arts Trio.

What is so unusual about these three musicians is that none of them is at the outset of their career, for they have all achieved notable success as chamber musicians. Their unity of artistry now displayed brings together a wealth of experience and instrumental mastery rare in 21st-century chamber groups and wholly exceptional in artistic refinement.

It would be wrong though to consider the Boarte Piano Trio as merely specialists in 20th and 21st-century music. Drawing on their united experience, they have already impressed with their interpretations of the great standards of the Trio repertoire, from Haydn to Rachmaninoff.

But it is not solely in relatively recent music that the Boarte Trio have established themselves as a world-class chamber ensemble; one of their most intriguing discoveries has been their sequence of performances of the early - and for many people, quite unknown - Piano Trio in G major by Debussy. The Boarte Piano Trio's performance of this charming, optimistic and melodic work, one of the relatively early unknown works by the great French master, has revealed a previously unknown aspect of Debussy's genius.

The noted music critic Julian Carlos Betz, writing of the Boarte Piano Trio's debut in Pullach, described their programme as constituing "an immaculate concert" - praise which has been widely repeated in the press and by word of mouth from discerning music-lovers.

"two years ago, Jaroslaw Nadrzycki and Karol Marianowski played in the Bürgerhaus Pullach as members of the Meccore String Quartet. When the latter re-organized, the two players founded a new ensemble with the pianist Konrad Skolarski, the Boarte Piano Trio, named after the contemporary Polish composer Krzysztof Penderecki who is also their patron and is currently working on his first piano trio for them. Had this work been finished as planned by mid November for the composer's 85th birthday, the trio would have premiered it in Pullach ... The musicians' excellence and experience, gained through their many concerts in various international concert halls, was convincing from the very first piece of the programme, Haydn's "Gypsy trio" in G Major, full of warmth and brilliance, displaying technically accomplished wit as well as highly contrasted moments ... without question, this concert will be remembered as an enriching evening and a superb debut."

Having been individual prizewinners of such prestigious awards as the 'Supersonic' Award of the German magazine Pizzicato, five 'Diapasons d'Or' of the French Magazine Diapason and several nominations for the Fryderyk award, the three Boarte Piano Trio musicians have also performed with leading orchestras such as the London Philharmonic Orchestra, the Royal Philharmonic Orchestra, the MDR Sinfonieorchester, and the Simón Bolivar Orchestra of Venezuela.

The future is undoubtedly assured for the Boarte Piano Trio - already being spoken of as one of the finest chamber music ensembles in Europe.

No cuts or alterations of any kind should be made to this biography without the consent of Boarte Piano Trio.