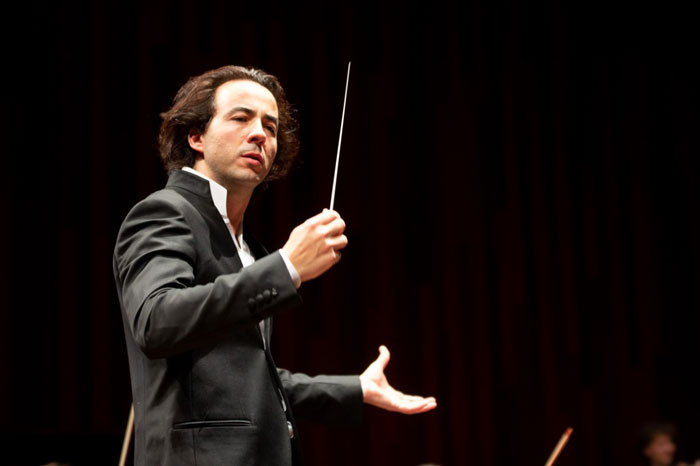 Carlos Checa is the Chief Conductor and Artistic Director of the Jove Orquestra Simfònica de Barcelona and the Artistic director of the FIMUC Festival.

The Spanish conductor Carlos Checa leapt to the international scene in China in 2005 conducting the City Chamber Orchestra of Hong Kong. In 2009 he performed in London with excellent reviews conducting the Royal Philharmonic Orchestra in the Cadogan Hall, and by personal invitation of maestro Gustavo Dudamel, in May 2014 he made his debut in Venezuela, in “El Sistema”. Since 2015 he is artistic and music director of the Jove Orquestra Simfònica de Barcelona (JOSB).In October 2016, he founded in Spain the Universal Music Symphony Orchestra ( the symphony orchestra of the prestigious record label Universal Music).

"I try to make a musician feel what I feel, said artistic and music director of the Jove Orquestra Simfònica de Barcelona."

Please visit the All Andorra - All Pyrenees website to read the complete Carlos Checa interview.

Since the 2012-13 season, he has been invited regularly to conduct at the Cuenca ciudad de música concerts, including the much-admired tribute to Teresa Berganza at the Auditorio de Cuenca, as well as a tour of the main auditoriums of the Community of Castilla La Mancha with the opera "The Little Sweep" by Benjamin Britten. He celebrated the 20th Anniversary of the Auditorio de Cuenca with a new production of Mozart's Die Zauberflöte. 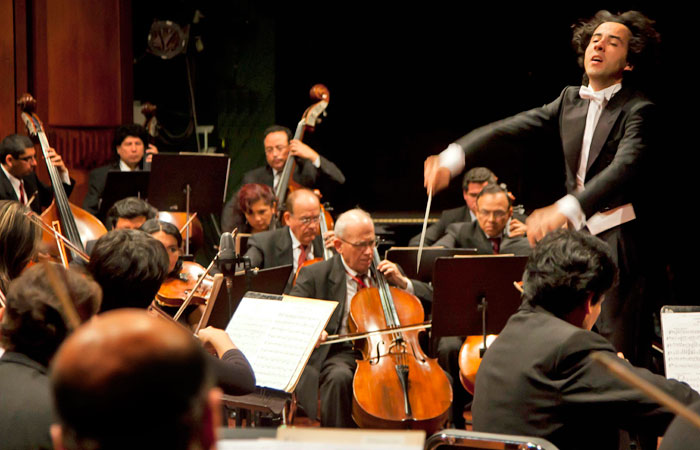 In the field of contemporary music he has conducted premieres of Spanish composers such as Andrés Valero Castells, José Luís López de Aranda, Albert Carbonell and Paco Toledo, whom the EMEC company recently published his "Hipodámica" Symphony, a work that was recorded under the batton of Carlos Checa with the Manuel de Falla Orchestra.

Carlos Checa began began conducting studies at the age of 17 in his native Barcelona, under maestro Francesc Llongueres . Carlos later studied with maestro Albert Argudo in the Conservatorio Superior de Música, graduating in orchestral conducting with distinction. In addition, Carlos has taken advanced conducting lessons with Kurt Masur, Antoni Ros Marbà and George Pehlivanian and has also studied composition, instrumentation and pedagogy of musica education, as well as piano, oboe and violin.

In 2006 he was awarded a scholarship by the Joven Orquesta Nacional de España.

No cuts or alterations of any kind should be made to this biography without the consent of Carlos Checa.

JOSB and Carlos Checa debut success at the Palau de la Música
"Carlos Checa conducted the entire program from memory, looking for his musicians energy, sensitivity and always showing a clarifying gesture for the young musicians of the orchestra."

"Dvorák's New World Symphony achieved a very dignified level: a powerful metal, warm woods, a set of strings and everything under a version that honed in detail, in the elegance of phrasing and expressiveness" ... "Concert corroborated us the good trajectory of this young orchestra and its conductor."
Lluís Trullén, Revista Musical Catalana, October 2017
The JOSB Opening Night Concert: A first step towards a promising future. "Conducting the JOSB meticulously, paying attention to every detail and under the musicians' attentive gaze, Carlos Checa made the orchestra sound sublime while they breezed their way through Ludwig van Beethoven's Symphony no.1. The orchestra gave a terrific performance of great technical and musical quality that conveyed the all score's classical refinement"
Lluís Trullén, "Revista Musical Catalana"
Royal Philharmonic Orchestra: ... "It was clear that the conductor Carlos Checa was wholly in command of his forces, eliciting a performance that got the concert off to a cracking start. .... "It was a brilliant concert, brilliantly conducted and played."
Alexander Leonard, Musical Opinion Magazine
Orquesta Sinfónica de Radio Televisión Española: "Carlos Checa with an elegant and personal gesture transmits security in the most challenging sections. No inertia at all. He keeps the tension throughout and shows gentleness making us think of Giulini".
Orquesta Sinfónica de Baleares : "Impresssive opening concert" "Carlos Checa adopted succesfully the Prokofiev's classical Symphony" ... "The Firebird that we heard ... notable and impressively in the delicate closing moments of the Finale"
Ray Fleming, Mallorca, Daily Bulletin