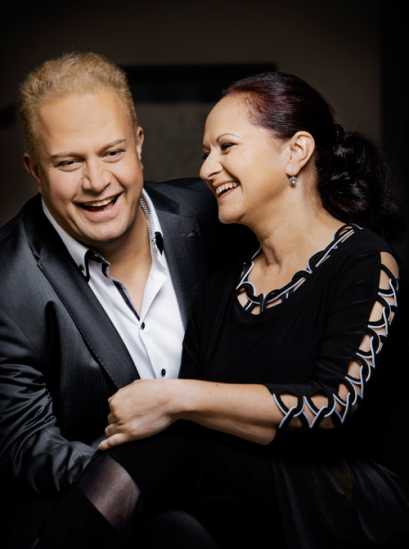 The story behind the Genova & Dimitrov piano duo sounds somewhat of a fairytale: "Shortly before leaving to Korea for a solo piano competition, there was only one available rehearsal room at the Hanover University of Music and it was with two pianos. We spontaneously decided to start to play a Chopin Etude in sync. It was as if we had been given wings!", remember Genova and Dimitrov.

Only few months later, at the end of 1995, the two young musicians caused a matchless sensation by winning the four great international piano duo competitions in Munich ("ARD"), Miami ("Dranoff"), Tokyo, and in Caltanissetta ("Bellini") within the following two years.

Since then, Aglika Genova and Liuben Dimitrov are one of the most internationally sought-after piano duos. They have been celebrated both, by audiences and the press alike, performing on the most important concert and festival stages in several douzens of countries on all continents, such as the Library of Congress and the National Gallery in Washington, the Schleswig-Holstein, Rheingau, Ludwigsburg and Schwetzingen Festivals, the City Hall in Cape Town, the Herkulessaal Munich, the Liederhalle Stuttgart, the Gstaad Music Festival, and MDR Music Summer, at the Konzerthaus Berlin, the Beethovenhalle Bonn, the Cologne Philharmonic Hall, and the Passau European Music Weeks, as well as at the March Music Days Russe, the Varna Summer Festival, and the Sofia Music Weeks, the La Roque d'Antheron, the Al Bustan Music Festival Beirut, Casals Hall Tokyo, Poly Theatre Beijing, and Teatro Municipal Rio de Janeiro, at the Ravello Festival, the Woodstock Mozart Festival, the Festival Miami, and the Chopin Piano Festival Duszniki. 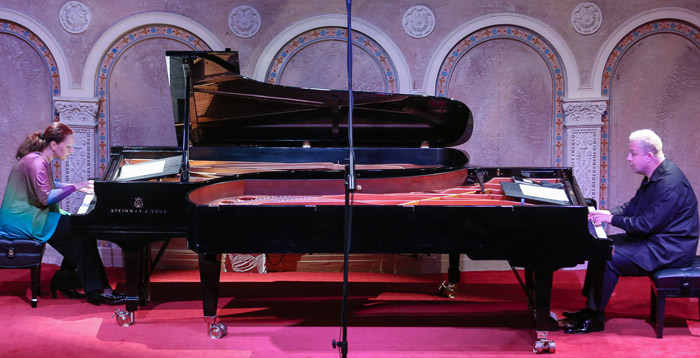 Since 2009, Genova & Dimitrov have been appointed Heads of Piano Duo Studies at the Hanover University of Music, the same one which they graduated from in the postgraduate class of Vladimir Krainev.

They serve regularly as jurors of significant international competitions, such as the "ARD" Music Competition in Munich, and were appointed Artistic Directors of the "Dranoff" International Two Piano Competition in Miami. The Artists give master classes worldwide, both for piano solo and duo.

Aglika Genova and Liuben Dimitrov look back on an impressive discography - 15 CDs of the Duo have been released by cpo and Gega New, and have been given constantly glowing reviews and awards by the international music media. Besides a number of world premiere recordings, such as Victor Babin's Concerto, or the complete piano duo works of Dmitri Shostakovitch, Johann Christian Bach, Muzio Clementi, and Pantcho Vladigerov, also the Artists' recordings with orchestra caused true sensation, such as the Concertos of Carl Czerny, Max Bruch, Bohuslav Martinu, Alfred Schnittke, Darius Milhaud, Francis Poulenc, Robert Casadesus, Felix Mendelssohn, and Bela Bartok. The albums with works by Gershwin, Copland, and Bernstein ("America for Two"), Ravel ("Favourite Flavors"), Arensky ("Five Suites for Two Pianos") or Liszt ("Works for Two Pianos") are enjoying great popularity in the music world. 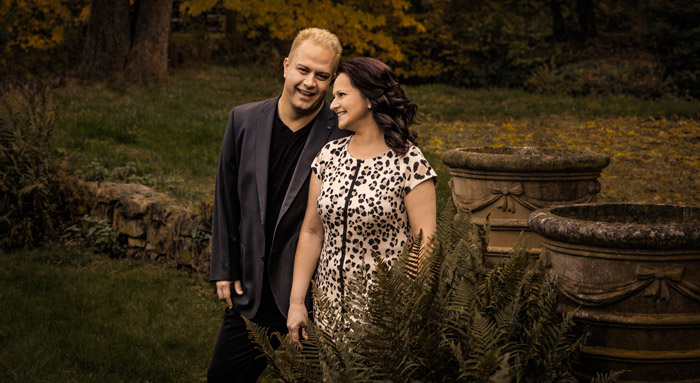 In 2017, the Artists were awarded the ECHO CLASSIC Prize and nominated for the "German Record Review Best Recordings List" for their CD 'Bela Bartok & Victor Babin – Concertos for Two Pianos' (cpo), as well as becoming Nominees of the 2019 OPUS CLASSIC Award for their CD 'Carl Czerny & Max Bruch – Concertos for Piano Duo' (cpo). In addition, the Duo has appeared in numerous international TV and Radio broadcasts. The portrayal TV documentary movie 'Etude for Two Pianos' which was produced and broadcast by the BNT Bulgarian National Television on the occasion of the 20th Birthday Anniversary, enjoys worldwide brisk interest.

Playing from newly published editions, Aglika Genova and Liuben Dimitrov have done both Amy Beach and the piano duo repertoire an excellent service here. From the splendidly Brahmsy Variations on Balkan Themes to the audibly 20th-century tapestries in the Suite Founded Upon Old Irish Melodies, these are works that should be welcomed with open arms by duo-pianists and audiences alike.
...
Genova and Dimitrov, who have devoted themselves to their duo since their student days, perform this technically demanding and richly imagined music with enormous affection and flair, conjuring its atmospheres and textures seamlessly, as if with one mind. A must-hear album for all who want to explore Beach’s highly rewarding output.

Michael Beek, Reviews Editor, BBC Music Magazine, CLASSICALMUSICAglika Genova and Liuben Dimitrov are a polished duo, unfailingly musical, with an ensemble precision that sits well with their two superbly matched (though uncredited) instruments. The disc, very well recorded, comes with an exhaustively detailed booklet and is a valuable addition to the Beach discography, so superbly enriched by last year's Gramophone Award-winning recording of her Piano Quintet (Hyperion, 7/20).

Genova & Dimitrov recently released their 16th CD, the world premiere recording «Sergei Rachmaninoff - Complete Works for Piano Duo» with nearly 150 minutes of music. Genova & Dimitrov  perform on two pianos, and also with four hands on one piano. The CD, which was recorded at Cologne Radio WDR, is released on the CPO label and it immediately reached No.1 in the charts.

No cuts or alterations of any kind should be made to this biography without the consent of Genova & Dimitrov. 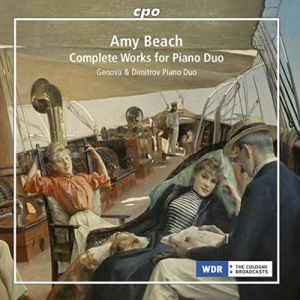 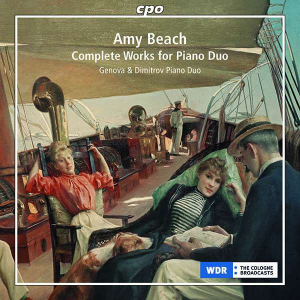 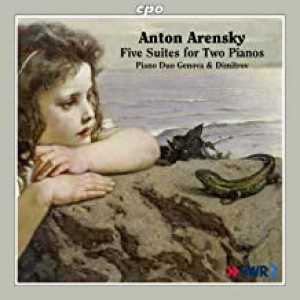 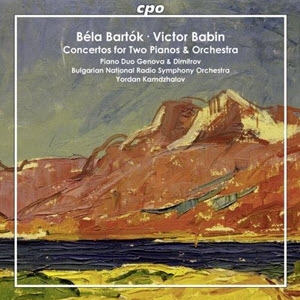 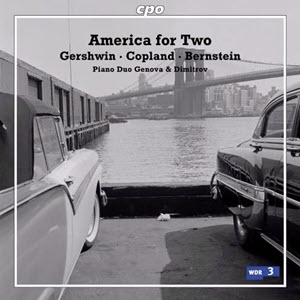 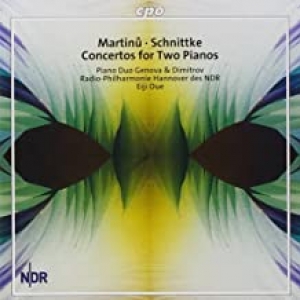 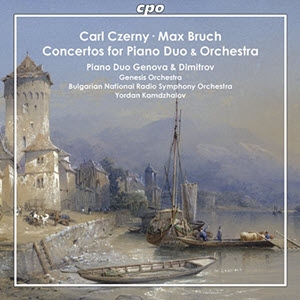 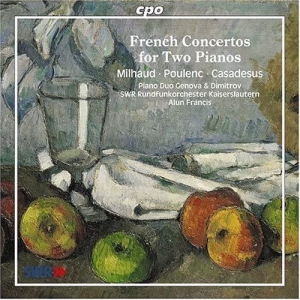 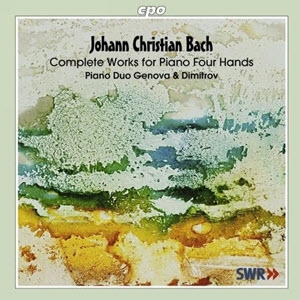 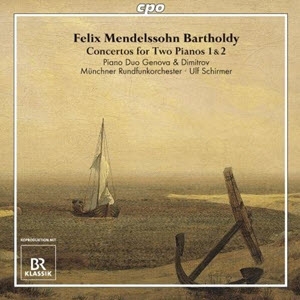 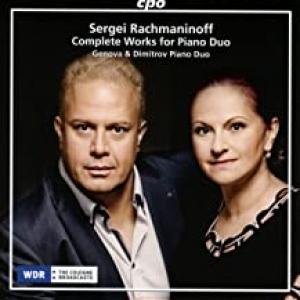