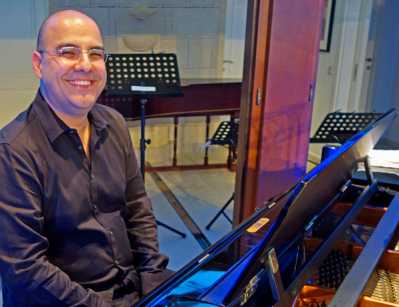 Accompanist and pianist Tarek Al-Shubbak studied piano, chamber music, history and the theory of music in Spain, his homeland. After completing all of his degrees with honours he then moved to London to study with Mikhail Kazakevich and Eugene Asti.

At the Trinity College of Music, Tarek finished his Postgraduate and MMus studies both in solo and piano accompaniment, obtaining the Arthur Leonard Haynes Scholarship, the Accompanist Prize and The Founders' Prize.

Tarek was actively involved in the Trinity College of Music's Schumann Festival 2006. An active performer in both chamber music and vocal recitals, he has appeared in concert in London, Leeds, Manchester, Birmingham, Lisbon, Madrid, Barcelona, Odda (Norway) and Vienna. He is also regularly invited to perform at the annual Casa dei Mezzo Chamber Music Festival in Makrigialos, Crete.

For three consecutive years Tarek was awarded the Top Scholarship from the Ministerio de Educación y Cultura of Spain.

Tarek is currently a music professor of Trinity College of Music, Greenwich, London.

No cuts or alterations of any kind should be made to this biography without the consent of Tarek Al-Shubbak.